Impact Investing – The Next Generation of Venture Capital

In the 1990s, Jed Emerson advocated the concept of Blended Value for funds, firms, social ventures, and foundations to invest with social and environmental impact, rather than to maximize financial performance. Simultaneously, approaches such as pollution prevention, corporate social responsibility (CSR), and triple bottom line or the “three pillars” (people, planet, and profit) began to measure non-financial effects inside and outside of corporations. Until around 2007, the term “impact investment” emerged.

“Impact investments are made into companies, organizations, and funds with the intention to generate measurable social and environmental impact alongside a financial return. Impact investors actively seek to place capital in businesses and funds that can harness the positive power of enterprise.”

In planning startup businesses, venture capitalists tend to seek opportunities in the industries that they are familiar with, where they will have a chance to own a large percentage of the company so they can have a meaningful impact on its direction and development.

In you look at venture capitalists’ profiles, almost all of them came to the VC industry with a strong background in any of these:

Now it makes more sense to us why most VC firms often play such an active role in advanced-technology-related sectors such as life sciences, biotechnology, software, clean technology, and medical innovation.

On one hand, venture capitalists actively work with work with endowments and foundations and raise assets from them. On the other, The VC industry drives venture capitalists to translate innovate ideas and technological advances to the development of new products and services to change the world we live in.

To date there are already a great number of VC firms dedicate to enhance economic and social impact while generating revenues:

Typically, medical innovations begin as breakthroughs and discoveries by scientists who work in government and private labs, however, new knowledge must be applied through the development of new drugs, devices, and diagnostic tools. In such cases, as part of the partnership, venture capitalists work with scientific teams to form startup companies, provide the capital required in such medical development process, and guide the management team regarding strategy, operations, development and production. In this sense, it is fair to say that venture-backed medical breakthroughs cure diseases, provide new treatment options, produce better health outcomes for patients, and raise overall quality of life. 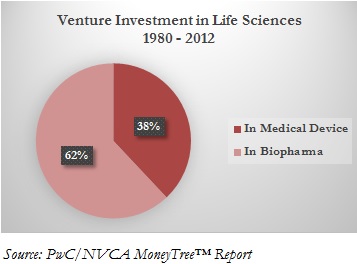 From 1980 to 2012, venture capitalists invested approximately $108 billion into around nearly 4,600 startup life sciences companies, with $41 billion in medical device investing, and $66 billion in biopharma investing.