Technical analysis is popular among commodities managers since they tend to be short-term traders. They look for temporary profit opportunities – futures contracts usually have short expiration periods. Technical analysis can generally be boiled down into charts/patterns, and indicators. Patterns are like head and shoulders, rectangles, and island reversals; indicators, on the other hand, are quite diverse and involve mathematical ratios, formulas, algorithms, and oscillator.

1) In terms of volume indicators, we look at the total number of futures contracts traded (either purchases or sales, but not both, to avoid double counting), or we can look at open interest. Both volume and open interest are key indicators of strength, so if they increas, traders will be more confident in a reversal or breakout.

2) The Ease of Movement Indicator (EMV) formula correlates the volume with the price movement of a commodity. If it goes above 0, then there is a buy signal, and vice versa.

4) Accumulation/Distribution Line (ADL) is essentially a variation on the OBV; ADL formula looks at where the price ends, and if the commodity ends the day at the midpoint for the price, traders are bullish, and vice versa.

2) When a commodity is volatile, a chart may actually be skewed and lead to misleading results. To deal with this, a trader can convert the chart to log scale.

3) The two core trend lines in technical analysis are Support and Resistance. A support level is the point at which a commodity will fall no further, as investors will see a bargain and start buying; the resistance level, on the other hand, is when the price gets to a high level and investors will take profits. Consolidation is where the bulls and bears are equally matched.

4) Uptrends and Downtrends: When constructing trend lines, a trader can also find channels – the support and resistance lines for the uptrend or downtrend. If the price moves outside the channel, which is often since trading activity has increased, a breakout above trend line is bullish, a move beyond the downside channel is bearish.

5) Moving Average (MA) is a way to smooth out trends in prices, and can be split into two types: the Simple Moving Average (SMA) and the Exponential Moving Average (EMA). If the price is above the moving average, the commodity is in a bullish trend, and vice versa. Crossover involves two moving averages, for instance, if the 20-day MA goes above the 60-day MA, we would enter for a purchase; if the 20-day MA crosses below the 60-day MA, we would get out of the position or short the futures contract. However, crossover strategies can get fairly complicated, such as the Moving Average Convergence/Divergence (MACD), which includes three steps:

a. Calculate two EMAs for the commodity, which is often for the 12-day and the 26-day MAs
b. For each day, these two averages will be subtracted
c. Calculate an EMA of these differences, which will be for the 9-day moving average

If the MACD has positive values, the trend is bullish, and vice versa. Another level of analysis is done using the 9-day moving average (the signal line/trigger line). There is a buy if the MACD line crosses above the signal line and there is a sell when it crosses below the signal line.

1) Normal Head and Shoulders: There are three peaks in this chart formation. The “head” represents the highest price in the move. The “shoulders,” which are left and right picks, represent the lower prices. The lows for all three should be close together and form a neckline, which is critical. If it is broken when the price moves downward on the right shoulder, it is a highly bearish signal. In another word, it can be a great opportunity to short a futures contract.

2) Inverted Head and Shoulders: This is where the prices have two shoulders with similar lows and a head that has a higher low. If there is a breakout on the right shoulder, it means there should be a bull run.

3) Double Top and Double Bottom: A double top is in the form of an M; a double bottom is the opposite.

4) Gaps: a gap is a major move in the price of a commodity that shows up as empty space on the chart, i.e., the opening price is higher or lower than the trading range of the prior day. A gap is significant because the belief is that it will be filled eventually.

a) Common Gap typically happens when a commodity is in a trading range and volume is thin.
b) Breakaway Gap is a breakout, in which the price has a sharp move outside of its range. It is usually the first stage of a big market move.
c) Runaway Gap forms in the middle of the major trend. It is an indication that the move will last for some time, however, eventually the move will end and brings along the exhaustion gap.
d) When the Exhaustion Gap happens, volume spikes, which means that the trend has hit its top. The gap will likely be filled.

5) There are continuation patterns that help commodity traders to determine if a trend has lasting power: The flag pattern has a rectangle shape, consisting of two parallel lines (support and resistance). If it’s a continuation pattern, there should be a slope to the rectangle, which is in the opposite direction of the main trend. If not, then a trader might want to move out of the position. The pennant pattern looks like a triangle, in which the two parallel lines are narrowing.

6) To mitigate false signals, there are also confirmation indicators, such as the Relative Strength Indicator (RSI).

7) Even when a commodity is in a bull market, there will be significant drops in the price, known as a retracement.

a) Correction is when a commodity falls at least 10 percent.
b) Gann Retracement is when the price of a commodity falls by about half from its move from the low to the high.
c) Fibonacci Retracement – a Fibonacci number is a sequence of numbers where the new number is the sum of the past two. There are two main levels, i.e., 38% and 61%, which are typical drops in the price of a commodity, especially when it is in a bull phase.

•    Bollinger Band – the Bollinger Band was based on Bollinger’s belief that prices tend to revert to the mean. It uses a simple moving average (SMA) for 20 days. Then there is a multiplier, multiplied by the standard deviation.
•    Relative Strength Indicator (RSI) is based on the changes in prices for a certain number of days. The standard is nine days. While the RSI has a range of 0 to 100; if it moves towards 25, then the commodity is oversold; if it approaches 75, then the sentiment has reached overbought levels.

In commodities trading, point-and-figure (P&F) charts are helpful in providing indications for entry points and exit points; this approach is focused on the closing price, which is to help reduce the volatility and false signals.

Candlestick charts focus on the open and the close for a commodity. It provides a quick way to get a sense of the overall sentiment. There is an upper shadow and a lower shadow, which indicate the high and low for the commodity, respectively.

If there is a long upper shadow within an uptrend, then the commodity is encountering resistance. It could be a sign that there will be a fall in the price.

If there is a long upper shadow in a downturn, it means that the price is at the support level and could be poised for a rally. The same principles apply to long lower shadows. When this occurs in an uptrend, it’s bullish, and vice versa. 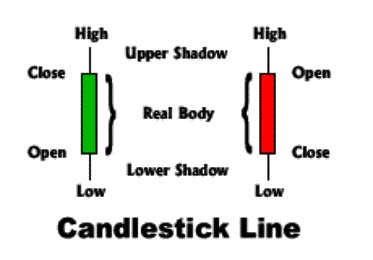